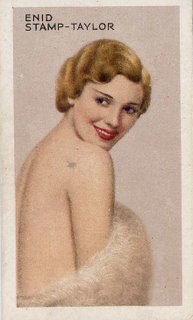 Upon leaving school Enid Stamp-Taylor won a beauty competition and appeared in Andre Charlot's revenue. After only three months she was playing prominent parts in musical comedy and revue. Her stage successes include "Madame Pompadour", "R.S.V.P." and "Gay Love" (in the film version of which she is now playing). She has been filming for some years, and her other pictures include "Money on the Air" and "Virginia's Husband."
Park Drive Cigarettes, Gallaher Ltd. Virginia House. London and Belfast.

She worked with Alfred Hitchcock in 1927 for 'Easy Virtue' aside from 'The Wicked Lady' and 'The Lambeth Walk' the other films listed on IMDB are all new to me. This card dates this series at 1934 or thereabouts, the year "Gay Love" was released.
Posted by Richard Gibson at 9:58 AM

i love enid stamp taylor. More so, because her mother and my grandmother were sisters. I have a lot of information about her but i am always after more. If you have anything to add, i would appreciate it.
Thanks, Jan

Hi Jan, I don't have anything else to add, sorry!

I am an ardent fan of Enid Stamp Taylor still although she passed away long ago, 1946, at St Georges hospital, Tooting following a seizure in her Park Lane apartment. Her most rememorable film performance was in The Wicked Lady, 1945. I know she was born in Monkseaton near where I live now at Wallsend but would love to know her burial site. One wonders if her daughter Robin Ann is still with us?

Can anyone tell me anything about a brief romance, possibly an engagement, between ES-T and Anthony de Bosdari? This would have been in 1928. She is described as 'of considerable social position, daughter of the King's equerry' - is this correct?

please can you tell me if enid stamp taylor was addopted as a child?, because my father always said that she was addopted into our taylor family. this would have made her our aunt

Anonymous - ES-T wasn't an adopted child (at least not in the usual sense: could perhaps have stayed with relatives during WW1?). 1911 census shows her aged 6, living in Monkseaton with father George Stamp Taylor aged 33, mother Agnes (29), brother Robin (2 - what happened to him?) and one servant. Father described as electrical engineer in locomotive department of (presumably North Eastern) railway. Did he become a Colonel in WW1?

Re my previous post, ES-T and Anthony de Bosdari became engaged in April 1926 but parted about 15 months later. Does anyone know more? Any photographs of them together?

I recently acquired an arched stained glass window in memorial of Dr. George Stamp Taylor who died in May 25th 1905. He had six children, one of which was the late Enid Stamp Taylor who was 1 year old when her father passed away. Copy and paste this below URL of his obituary:

The stained glass window has the following message inscribed on its bottom:

"To the Glory of God and in loving memory of George Stamp Taylor, physician and surgeon who died May 25th 1905 aged 58 years."

The window was made somewhere in England. Not sure which church was placed in. Window ended up in Phoenix, Arizona, USA where I bought it at an auction. After doing some research about Dr. George, I found out that his daughter was a famous actress who passed away in 1946. Hope this information will add some value to this family's rich history.

I wish I can post the picture of this 40"x85" gorgeous stained glass window.

I can be reached at: rogersaad@yahoo.com