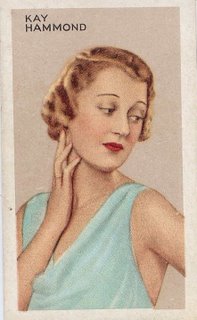 Kay Hammond is the daughter of Sir Guy Standing, well known on the London stage and the American screen. She was born in 1909, studied at the Royal Academy of Dramatic Art, and made her debut in "Tilly of Bloomsbury." Her appearances include "77 Park Lane" and "Nine Till Six," and she played with Gertrude Lawrence in "Can the Leopard....?" Her screen career started in 1931 with "Carnival," followed by "A Night Like This" and "Out of the Blue."
Park Drive Cigarettes, Gallaher Ltd. Virgina House, London and Belfast.