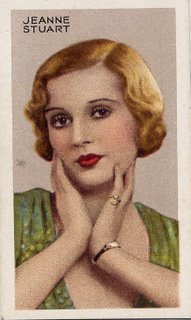 Jeanne Stuart, born in 1908, made her debut on the New York Stage in "Nine Till Six." In London she scored a big success in John Van Druten's play "After All" followed by "It's a Girl" and "Roadhouse." Her film career started in 1931 with "Mischief" and her later films are "Leap Year" and "The Great Defender," which is Matheson Lang's new production. This famous actor's portrait is No.27 in this series, and Margaret Bannerman, also appearing in his new film is No. 38.
Park Drive Cigarettes, Gallaher Ltd. Virginia House. London and Belfast.

Jeanne Stuart seemed to have led a very interesting life insofar as she had a three year relationship with James Stewart and afterwards married into the Rothschild family. There seem to be very few images on the internet of Jeanne, I could find only one.