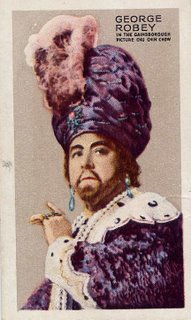 Britain's "Prime Minister of Mirth" has appeared at every music hall of note in the kingdom. George Robey is still exuberantly active in his sixties. He was awarded the C.B.E. after the War for the highly succesful charity performances he organised, and later toured with his own revue company in this country and in Canada. He appeared in "Helen!" in 1932, and recently in the films "Don Quixote" and the new version of "Chu Chin Chow".
Park Drive Cigarettes, Gallaher Ltd. Virginia House. London and Belfast.