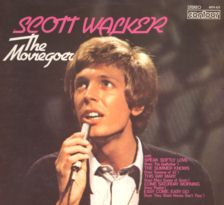 I revisited 'Tilt' today. I found it totally inaccesible when I bought the record in 1995 the week it came out. Today, it fell into place a little more, perhaps in anticipation for 'The Drift', after all on release in 1969 'Scott 4' disappeared and was quickly deleted because it was also inaccessible to the majority of fans.

Scott discusses in 2 British magazine interviews The Wire, May 2006 issue (p24-29) and Mojo, June (p44-p48) 2006 'The Drift' along with his creative processes making the album, the music he likes and his cinematic influences which as we all know have been there from the 60's 'Scott 4' with 'The Seventh Seal' and even on 'Tilt' the first track; 'Farmer in the City' (Remembering Pasonlini).

Ian Harrison: Do you want to punish or confuse listeners?
Scott Walker: "....I've been watching movies and seeing art for years, things that I really like but I don't know what they are...."

Ian Harrison: Did a moment in your youth send you this way?
Scott Walker: "I remember as a kid watching daytime TV, and seeing things like [Jean Cocteau's 1946 film] La Belle Et La Bete and The Rocking Horse Winner, a British film. The chiaroscuro aspect of the European movies clicked with my child's mind and stayed with me, much more than American films unless they were film noir. Later, when I used to go down to the cinema on Hollywood Boulevard after school, I saw and Ingmar Bergman film, The Virgin Spring, in a triple bill of horror movies. It totally changed my life. I started to go to the art houses on Wilshire Boulevard and saw everything - Fellini, Visconti, Bresson, more Bergman. That's what made me want to come Europe, to be closer to the film and the culture.

Ian Harrison: But if it all goes belly up...is it back to the darkened cinema?
Scott Walker: I'm not such a big film fan these days, 'cos there's such shocking garbage around. But I did see Hidden [Michael Haneke's 2005 film], which was wonderful, and The New World[Terrence Malick's film from the same year], I liked that. I'd love to have made a film. That's my only big regret. I'm fearless about producing, so I'd have no fear about directing. I don't think I'll do it, but it would have been nice. You can't do everything.

Later this year we have '30 Century Man' a documentary about Scott to look forward to.

I'm also grateful to Stephen Cooke of 'If Charlie Parker was a Gunslinger...' for pointing out the Scott Walker clips on You Tube:

The Culture Show, link.
'Rosary' from 'Tilt' on Later with Jools Holland, link.
'Track 3' from 'Climate of Hunter' on The Tube, link.
Posted by Richard Gibson at 9:09 PM

I agree with your comments about Tilt being a tough listen first time around. It seems with each album Walker is pushing out as far as he can. Tilt now sounds very tame almost in comparison to the new album. Something tells me that age will not mellow The Drift in quite the same way.

I'm not sure, maybe by the time the next LP comes out this one will be, for me at least as accessible as 'Tilt' seemed yesterday.