Coming attraction: I am a Sex Addict 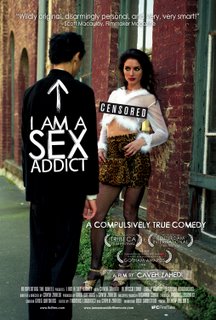 I guess this is what you'd call a viral or word of mouth marketing campaign for this independent film 'I am a Sex Addict' written, directed, co-produced and starring in an autobiographical role Caveh Zahedi. The film opened on April 5th in San Francisco and will be in New York on April 12th. No word yet on a European release date.

Actually the film, looks interesting as it's based on Zahedi's own experiences. Reading the notes from IFC Films who are releasing the film Zahedi went to Switzerland to try to work with Godard.

The distributor has three signed copies of the film poster to give away, but this promo is open only to North America. If you are interested please email me and I will pass your information on for them to send you the poster.
Posted by Richard Gibson at 6:48 PM