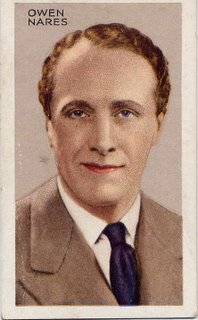 Born in 1888, Owen Nares has had an almost continuous West End stage career since 1908. His chief successes were in "The Calendar", "Cynara", "Pleasure Cruise" and "Sixteen" one of the most succesful plays of 1934. He made his film debut in 1934 with "Loose Ends", with Adrianne Allen, whose portrait is No. 44 in this series. He has since appeared in several British films, including "The Middle Watch", "Sunshine Susie" and "One Precious Year".
Park Drive Cigarettes, Gallaher Ltd. Virginia House. London and Belfast.