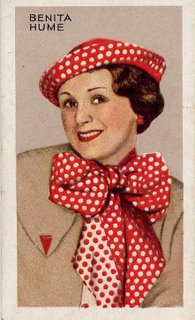 Benita Hume was born in 1906 and studied for the stage at the Royal Academy of Dramatic Art before making her debutat the age of 17 at Drury Lane. She is well known on stage and screen on both sides of the Atlantic, having toured Canada in her big success, "Symphony in Two Flats", which had long runs in both London and New York. Recently filming in England, she played in "The Private Life of Henry VIII," "Don Juan," and "Jew Suss."
Park Drive Cigarettes, Gallaher Ltd. Virginia House. London and Belfast.

IMDB entry for Benita Hume, link.
Benita, it seems later than the above was published (I estimate 1934) was married to Ronald Colman. Picture of them together, link.
Posted by Richard Gibson at 4:59 PM