A visit to Chillingbourne, Kent 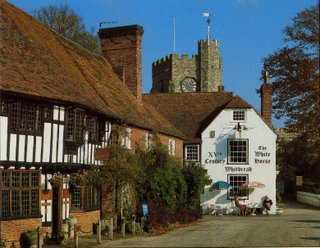 Chilham aka Chillingbourne in Kent (pictured) is one of the locations for Powell and Pressburger's 'A Canterbury Tale'.

Yesterday I joined Paul Tritton author of 'A Canterbury Tale - Memories of a Classic Wartime Movie', Steve Crook from the Powell and Pressburger Appreciation Society, at least one cast member, several people from the surrounding area that remember the film being made and approximately sixty other enthusiasts of the film for the annual 'A Canterbury Tale' Location Walk.

Once I have some photos developed I will post them here. In the meantime, I understand from Paul that the building to the left of this image (in the tudor style) which is in the square in Chilham was where the bus comes to collect Alison Smith (Sheila Sim) in the film.
Posted by Richard Gibson at 9:02 PM

OK where's the other Chilham photos?