The Typewriter, the Rifle & the Movie Camera 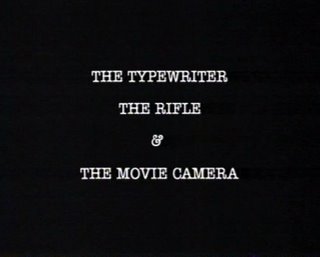 I re-watched this documentary from 1996 earlier today; Fuller's answers to the questions posed by Tim Robbins (the interviewer) offer us some insight to this film maker, who lived an extraordinary life and as the documentary points out had already had two career’s before he even made his first film.
The main theme, for me was that Fuller was a superb story teller, and the quotes below re-enforce this:

Robbins “Your first experience in battle where you actually shot someone. What went through your mind?”
Fuller “Well the thing that went through my mind was that I was alive and he was dead, that’s number one…”
Although Fuller's response might read like flippant wise crack he goes on to tell Robbins how its the face of "number one" that haunts you the more you kill, he is deadly serious and we believe him, he was in battle and brought this authenticity to his war films.