Not impressed so far 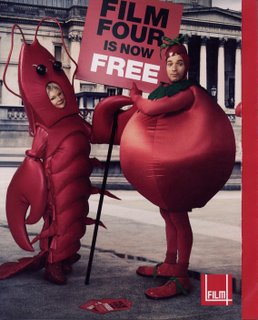 Film Four, previously £6 per month on subscription changed to Freeview effective 23rd July. I'd previously paid for this channel and although it wasn't perfect it was one of the best fil-um channels we had. In the past three months they have showed several Bergman's I'd never seen, 'Port of Call', 'The Rite', 'Summer with Monika',' After the Rehearsal', 'From the Life of the Marionettes' as well as Shohei Imamura's 'Profound Desire of the Gods' and Sezuki Seijun's 'Gates of Flesh'.

I suppose my point is this, they were showing at least some films that for the most part were not readily available and for that I was very grateful and happy to pay my six quid. Now I fully understand that their business model didn't stack up and they had to commercialise and take advertising and that those advertisers need to sell products during prime slots which explains why the 9pm slot is loaded with films that are going to pull in the punters but can't we at least have some of the 'rarer' films for want of a better word on late at night? We were promised a 'Roberto Rosellini season', on the insert in Time Out (above) that covers the period 23rd July to 20th August all I can see is 'Rome, Open City' and 'Journey to Italy', no complaints there except can't the programmers dig a little deeper and show more and at least one Rosellini UK TV viewers haven't been able to see for a while?

Right now I'm quite disappointed with Film Four. I hope they can redeem themselves and there are a few more gems they can unearth for the film fans who frankly aren't that bothered by this sort of list. If Film Four need some help finding films or suggestions from viewers then I'd be happy to help.
Posted by Richard Gibson at 8:30 PM