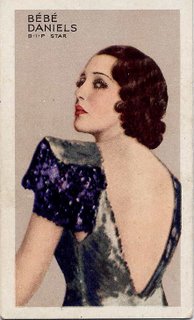 Bebe Daniels was born in Dallas, Texas in 1901, and acted on the stage and films when she was a child. She continued with her career and her first talkie appearance was in "Rio Rita," followed by "The Silver Dollar" and "42nd Street." During 1933 she came to England and appeared in the films "The Song You Gave Me" and "A Southern Maid" for B.I.P. On her return to America she starred with John Barrymore in "Counsellor-at-Law".
Park Drive Cigarettes, Gallaher Ltd. Virgina House, London and Belfast.

IMDB entry for Bebe Daniels, link.
Posted by Richard Gibson at 11:45 AM