Coming attraction: The Wind That Shakes The Barley 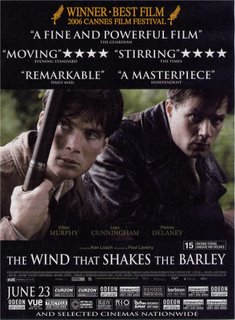 'Useable Past' article from today's Guardian, link. According to this The Times labelled Loach worse than Leni Riefenstahl, it seems the British press have given Loach a bit of a bashing over the subject matter of his latest film. Interview with Ken Loach in yesterday's Guardian, with overview of the quotes used in newspapers such as The Sun and The Daily Mail, link. According to The Daily Telegraph yesterday when he was interviewed in Cannes he said "I don't think there's going to be any controversy over this film", link.
Loach always takles subjects that frankly our other film makers won't go near, this is why for those that enjoy his work think that he is a vibrant and interesting film maker, regardless of his political views and amongst the best of those film makers still working here.
Posted by Richard Gibson at 6:22 AM