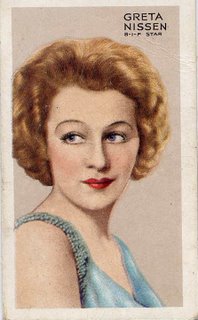 Well-known on the American stage and screen, Greta Nissen has recently appeared in London in the succesful revue, "Why No To-Night," in which her talented dancing is one of the main features. She was born in Norway and appeared at the age of 15 in a ballet as a protegee of Queen Maud. She is also a singer and an accomplished actress, and recently filmed for B.I.P. in their production of "Red Wagon." Another star of "Why Not To-Night" is Gina Malo, No. 29 in this series.
Park Drive Cigarettes, Gallaher Ltd. Virgina House, London and Belfast.