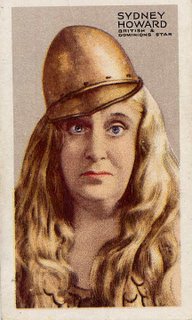 This famous Yorkshire comedian began his career after the war, and for the first six years toured both this country and in South Africa. He is well known for his permanent expression of dignified suprise and made a big hit in the West End production of "Hit the Deck" and later, in "Funny Face." His film career started in 1930 with "French Leave," and his subsequent success include "The Mayor's Nest" and his latest farce "Girls Please."
Park Drive Cigarettes, Gallaher Ltd. Virgina House, London and Belfast.

Like Ann Harding (also posted in this series) and Nicholas Ray, Sydney was born on 7th August. Great day for a birthday, even if I do say so myself.