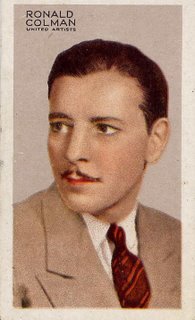 Ronald Colman was born in Richmond, Surrey and was a seaside pierrot before the War. After war service he succeeded in starting a film career. He went to America in 1920, and had a great success in his first talking film, "Bulldog Drummond," followed by "Cynara," "Arrowsmith," and recent big hit in the "The Masquerader" with Elissa Landi. His new is a revival of his famous part in "Bulldog Drummond Strikes Back," in which he will co-star with Loretta Young.
Park Drive Cigarettes, Gallaher Ltd. Virgina House, London and Belfast.