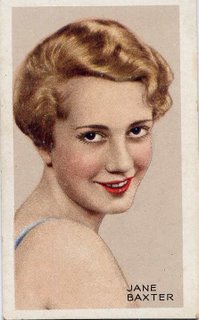 Another English actress who has recently signed a contract to film in Hollywood, Jane Baxter was born in Germany in 1909. She studied under Italia Conti, making her debut in 1925 in "Love's Prisoner." Her film career started in 1931 with "The Middle Watch," followed by "The Constant Nymph," and recently she played opposite Richard Tauber in "Blossom Time," the film of Schubert's life. In "The Middle Watch" she acted with Owen Nares, whose portrait is No. 12 in this series.
Park Drive Cigarettes, Gallaher Ltd. Virgina House, London and Belfast.