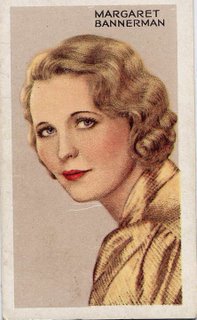 Margaret Bannerman started her West End career in 1915. Born in 1896 in Toronto, and since coming to England has had an almost uninterrupted stage career, visiting Australia in 1928. She made a big hit in the "The Calendar" and "The Mouthpiece." She has had a long screen career, appearing "Lily Christine" with Colin Clive, whose portrait is No 48 in this series, and "Two White Arms." Her new film is "The Great Defender," in which also appears Jeanne Stuart (No. 15 in this series).
Park Drive Cigarettes, Gallaher Ltd. Virgina House, London and Belfast.

Thank you for the bio info for Margaret Bannerman-and the link to IMDb. Big help in my research Bob Summerell Bloomington IL USA