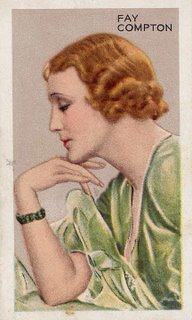 Daughter of the well known actor-manager, Edward Compton, Fay Compton was born in 1894, and with her sister Viola trained for the stage. Her first appearance was in 1911. In 1920 she became famous in the name part of "Mary Rose". She visited America and in 1929 played in the West End run of "Autumn Crocus," starring also in A.T.P.'s talkie version. Now in "Murder in Mayfair" with Edna Best whos is No. 11 in this series.
Park Drive Cigarettes. Gallaher Ltd. Virginia House, London& Belfast.

Whoever did that illustration looks as though they were giving her the beginnings of a goatee, there.

Maybe this was originally a modified carnival poster?

(love this series, by the way)