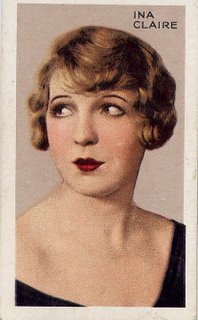 Born in Washington in 1892, Ina Claire made her name in vaudeville and became one of New York's famous variety stars, being especially noted for her impersonation of Sir Harry Lauder. She is a capable actress in straight parts playing throughout the long runs of "The last of Mrs. Cheyney" and "Reunion in Vienna". Her films include "The Greeks had a word for them"and she has recently reappeared on the London stage in the succesful play "Biography".
Park Drive Cigarettes. Gallager Ltd. Virginia House, London & Belfast.

IMDB entry for Ina Claire. Interestingly she was in 'Ninotchka' with Greta Garbo. The only film of Ina's I have seen.

Here is a better picture.
Posted by Richard Gibson at 10:38 PM