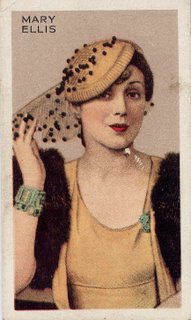 In 1924 Mary Ellis, with her fine voice and acting powers made a world-wide hit as the original "Rose Marie" in New York. She was born there in 1899, studying singing for three years before making her stage debut in 1918. She first came to England in 1930, and had success in the West End in "Knave and Queen" "Strange Interlude" and "Queer Cattle". She returned to America, but is shortly re-appearing here in the title-role of "Josephine".
Park Drive Cigarettes. Gallaher Ltd, Virginia House, London & Belfast.

Is this the same Mary Ellis? The date does not quite correspond. Is there only one Mary Ellis or are there several? A picture search is inconclusive here and here.

Again I have an incomplete series of these cards.
Posted by Richard Gibson at 12:45 PM