Stars of stage and screen # 3 : Wheeler and Woolsey 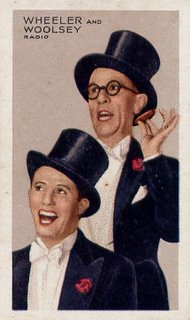 The famous comedians made a big hit in their first appearance together in "Rio Rita" with Bebe Daniels (no.46 in this series), later in "So This is Africa" and "Diplomaniacs." Wheeler was a theatre prop-boy and Woolsey a jockey who ceased riding after injury, before they joined forces as a vaudeville turn. Their most recent film is "Cockeyed Cavaliers," and they may shortly present a turn in London. For another famous comedy pair see Laurel and Hardy, no.9, in this series.
Park Drive Cigarettes. Gallager Ltd. Virginia House, London & Belfast.

A fan site on the pair comments that they saved RKO from bankruptcy.
Posted by Richard Gibson at 2:01 PM

Two of my favorites!

I've long held the near heretical thought that their 1933 film 'Diplomaniacs' is a far more piercing, funnier piece of political satire than both 'Million Dollar Legs' and 'Duck Soup'.

If you've never seen a W&W film, do whatever ye can to correct that

I'd never come across these guys before, which is the good thing about this card series, I'm learning about some forgotten stars.