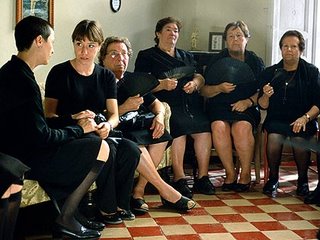 First thanks to all those that took part in the survey, the findings make interesting reading and are not a million miles away from some of the UK press with a few exceptions. Thanks also to those other film bloggers who promoted the poll on their sites, very much appreciated.

I'm not going to go into the issues with polls, what constitutes best and all that jazz suffice to say I quite like a good list and reading over what others thought were good films. My personal choices are near the bottom of this post.

Happy New Year to all visitors.

Sight and Sound
In the January 2007 issue no less than 47 critics voted for the films that impressed them during 2006. They then distilled these lists into a top 10:

In the December 20th issue of Time Out, their critics picked their favourite film of 2006. They each picked only one each.

There are only two films that appear on all lists; The Departed and Volver, both certainly very good in my opinion. Perhaps, if there is a conclusion to this survey it is that both of these are films of the year 2006? Perhaps I should stick my neck out and 'crown' them such?

My personal choices
In the end I didn't vote in the poll. The films I have enjoyed most of all over the last 12 months were, in no particular order:

Jonathan Dayton? Okay, but what about Valerie Faris, his wife and co-director.

Blimey. That's on ehell of an oversight.

That's my mistake Brendon, I've corrected it now. Having not seen it when I went to IMDB to get director names I took only the first one. Apologies and thanks for pointing that out.