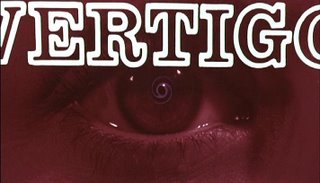 'Vertigo' is very much a film set in San Francisco, the city is intergral to the film. I had a spare few hours as was in town for a conference and managed to visit Mission Dolores, a Spanish mission in, more or less the downtown area of San Francisco. About a year ago I'd bought a copy of Nathaniel Rich's book 'San Francisco Noir' which I'd recommend to anyone. I suppose this is where the inspiration for my visit came from.
Inside the book lists some of the great Film Noir's made in San Francisco and some of their locations. As I had been to the city twice before I was keen to explore some different sights with what little spare time I had.

Mission Dolores itself as I hope the below sequence of photographs demonstrates really hasn't changed that much in the 48 years since the film was released. The trees are certainly a lot larger and they've changed the entrance but it's very easy to trace, as I did the scenes filmed in and around the mission with the exception of the grave where Madeleine Elster played by Kim Novak stands. This I had trouble finding, I think the very helpful young lady that worked in the gift shop on the day of my visit (last Saturday: 14th October) explained that there was a grotto, at least I believe that's what she called it, which has subsequently been removed. I was able to spot one headstone that is quite clearly identifiable in the film as a reference point.

Interestingly in Rich's book he states that the headstone of Carlotta Valdes constructed for the film stood for a further twenty years after the film was shot. The helpful lady did not know anything of this.

For those who remember this sequence in the film you'll remember that the cemetery is filled with flowers, roses specifically stood out in my mind. Last week, some roses were in bloom and although my camera could not match the outstanding Technicolor of the original film I was pleased to be able to spot a couple of landmarks and come close to creating a kind of then and now blog-scrap book.

Little did I realise that this had, in part been done before. Fellow film blogger Brian who run's the excellent 'Hell on Frisco Bay' pointed me to a wonderful site called 'Vertigo...then and now' which I thoroughly recommend, there are many more wonderful San Francisco locations to be checked out on this site, it's almost like you can do a tour without even having to go there and really see the locations as they were in the late 50's and as they are today.

Below the information leaflet given to visitors about the history of the site. 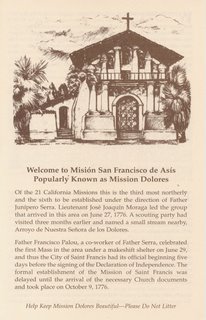 God , I love this feature! The story in Vertigo and the locales are such a unique interweave. It's a one-of-a-kind experience.

It looks great, Richard!
I´m looking forward to seeing your next real location.