Coming attraction: Lights in the Dusk 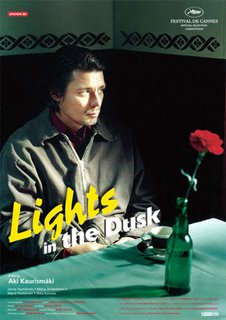 Last night I attended the LFF screening of 'Lights in the Dusk' (Laitakaupungin Valot), the third in a loose trilogy from Aki Kaurismäki. Sadly, owing a very slow tube I missed the start so I don't feel comfortable writing too much on this film. What I can tell you is that what I saw I enjoyed as much as the other Kaurismäki films I have seen. 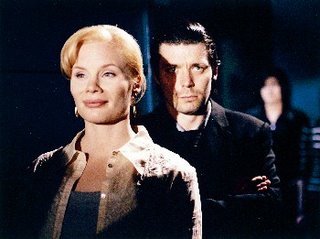 Maria Järvenhelmi as Mirja and Janne Hyytiäinen as Koistinen in 'Lights in the Dusk'.

'Lights in the Dusk' deals with lonliness and isolation, the first in the loose trilogy; 'Drifting Clouds' (Kauas pilvet karkaavat) dealt with unemployment and the second and only other one I'd seen; 'The Man Without a Past' (Mies vailla menneisyyttä) dealt with homelessness.

After the screening, the lead actress who plays Mirja in the film (Maria Järvenhelmi) above with was briefly interviewed by critic Geoff Andrew, mostly about how she and Kaurismäki worked together on the film. The tone was quite light and not analytical with a few questions from the audience, most of which seemed to really enjoy the film. The sort of topics that were touched up included a discussion of Kaurismäki, according to Järvenhelmi, prefers to capture the shot in one take and scorns on improvisation. How he is against the anti-smoking lobby in which is one of the reasons everyone seems to smoke in 'Lights after Dusk' and that he wants to make at least 20 features (he’s currently made 16).

My friend Neil, who attended the showing with me tells me the UK release will be in Spring/Summer 2007 so I will have to wait until then to catch the start of this film and see what I missed. 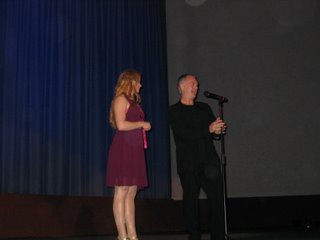 Links
IMDB entry for 'Lights in the Dusk', link.
Listing on LFF website, link.
You Tube clips of part of the interview, here and here.

Posted by Richard Gibson at 3:38 PM