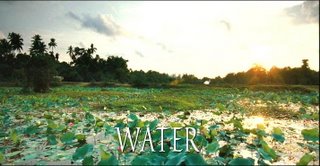 ‘Water’ has just been released on DVD. This is third in Deepa Mehta’s trilogy after ‘Fire’ and ‘Earth’.

The film quickly shows us the harsh realities of life in 1930’s when a young girl of seven is asked by her father if she remembers getting married. Not surprisingly the girl answers with bewilderment “No”. Her father goes on to explain that now she is a widow. “For how long?” asks the girl innocently not realising that society’s fate for her is to spend the rest of her life with other widows mourning. 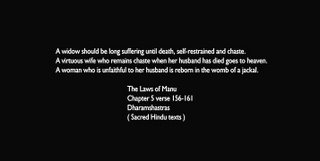 As the above screen shot should illustrate widows have very little other than a life of self denial and social exclusion to look forward to. A political film, in the broadest sense Mehta does an excellent job at educating those, like me who were ignorant to the plight of how women were and still are treated in India and parts of Asia. In one scene in the film we learn that widows are offered three options; to be cremated with their husband, to, if the husbands family permits remarry the husbands younger brother or live the life on the outskirts of society.

As has been widely reported the production of this film was moved from to after a catalogue of protests, death threats to the film-makers and sabotage. I hadn’t seen the earlier two films either and 'Water' certainly works as it's own story.

I actually think it’s a film that has very broad appeal and will, I am sure will further highlight this cause.

Posted by Richard Gibson at 4:02 PM