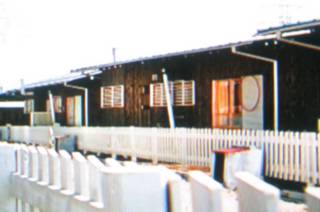 I borrowed the Criterion DVD from a friend. I am embarrassed to say I haven’t seen Ozu’s ‘Tokyo Story’ all the way through so this was my first Ozu film. I enjoyed it although it wasn’t quite what I expected. Essentially it’s quite a light film with ideas about suburban Japanese life. The theme of television is key to this film; I particularly like the conversation that takes place between two middle aged gentlemen that television will make Japan a nation of 100 million idiots.

From a design point of view I found the film very like Tati’s ‘Mon Oncle’ which I like very much. It feels similar insofar as the colours (they are only maybe a year apart) there are some great shots that show the suburban landscape to really great effect and Ozu uses theme like music in a similar way to Tati.