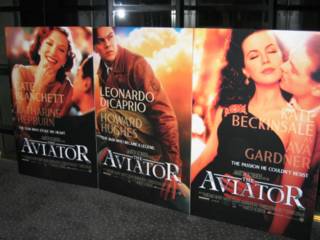 The Aviator
Posted by Richard Gibson at 1:55 PM

The Aviator is highly entertaining. Scorsese called it a 'Celebration of Howard Hughes'. Certainly some criticism I have read highlights that it sanitizes Hughes life and takes out all of the unpalatable elements of his character. This may be true but as a film I found it to be hugely enjoyable and very entertaining. Actually I enjoyed the elements of the film that focused on aviation and his business dealings more interesting than the romance elements with the film stars. To me Leonardo DiCaprio feels far more at home in The Aviator than he was in ‘Gangs of New York’. Cate Blanchett puts everything into her portrayal of Katherine Hepburn, a difficult part as her role is more important to the story progression and because viewers will feel more strongly whether Blanchett carries off Hepburn than if DiCaprio is convincing as Hughes.

There is a nice scene where Hughes burns his expensive suits before calling John C Reilly’s character to Woolworth/Penny or Sears to buy cheaper suits.
I am sure Scorsese watchers will find this scene fits nicely with the recurring theme within his films where protagonists are seen putting their hand into a flame.