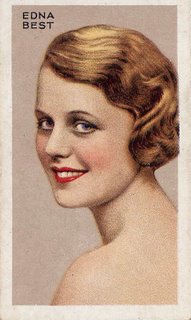 Born in 1900, made her London debut in the evergreen "Charley's Aunt", since appearing in many famous plays, including "The Constant Nymph", "The High Road" and "Michael and Mary." In the last-named her popular husband, Herbert Marshall, played with her, and he has also appeared in her films, "The Faithful Heart" and "The Calendar." In "The Key" she was supported by Colin Clive, whose portrait is No. 28 in this series.
Park Drive Cigarettes, Gallaher Ltd. Virginia House. London and Belfast.

I do remember her from "The Ghost and Mrs. Muir," too, but I had to look at her filmography to jog my memory. It seems too that she was married to Herbert Marshall, who figured in my post today. It is funny how often bloggers get on the same wavelength!

Yes it is funny, how things pop up, I just posted on Oleg Cassini and I'd never heard of him until 2 days ago and today I read he has passed away.

I have, I believe years ago seen "The Ghost and Mrs Muir", I think I will revist that.